I got news this morning that a great man past away.  He was Jack, but to those of us who grew up in Parchment, Michigan, he was simply, Coach Koch.

Whether he was aware of it of not, he likely was in my life a lot longer than I was aware.  I grew up with a dad who was a Parchment Fireman, which meant, I grew up with a dad that attended all the home football games.  If my dad attended the games, I  attended the games.  I fell in love with the sport.  There will never be anything better than an Autumn night under "the lights".  I can't remember if he was there when I was 5, the year my cousin broke his leg at the Gull Lake v. Parchment game, and I ran out on the field faster than any of the adults.  Maybe he was there, and maybe he knew that someday, I'd be running out there in high school whenever one of "my guys" were hurt.

I remember him as my brother's wrestling coach, the big guy with the deep voice and the barrel-chest.  I remember him as the runner, who shuffled along, and when I run now, I think I must have picked up on the technique.  I also remember the summer day in 1980 when I went to ask if I could be a football manager, and the rules that were set for me that day.  I remember that day, I suddenly had a whole flock of brothers, because it was rule #1, don't date these guys.  And just like these guys, I was yelled at in that rich fatherly voice. I was told to follow and do what Tony V did, and I would do a good job.  I almost quit that first year...  There were nasty names and rumors, and when I went to quit, he was honest, that he had heard them too.  But he also gave me one of my life's biggest lessons, "Don't ever let your gender stop you from doing what you love".  With those words I stuck with it, and for the rest of that year, and six years later, I worked in the sport that I loved.

When I was a young adult, my dad had a heart attack.  In the moments of confusion, I actually did think about who would give me away when my wedding day came around.  There were 3 on my short list: my Uncle Lee; my dad's cousin, Louie; and Coach Koch.  He meant that much to me.  I was blessed to be his Senior Assistant my Senior year for first quarter.  I spend that hour in "my office" in the locker room.  Yep, I got credit keeping that place running smoothly.  And I knew that he must of trusted me.  I rode in ambulances when Chmiel blew his knee, and when one of the Vernia's got hurt, and I massaged Kokmeyer's cramped up calves so he could get back on the field so we could win the game.  He had Stinson and Leatherman keep me safe the night we played St. Phil and their fans threw stuff at the team as we headed to the bus. He always watched out for us.

I've only seen Jack a few times since high school, but I remember them well.  The Borgess Run went by my house in the 90's.  He came shuffling by while I was dressed in my cap and gown to graduate with my Masters at WMU.  He stopped his race to walk up the driveway to shake my hand and congratulate me.  And when my wedding day came around, yep, he and Marlene were there to celebrate with us.  It was that day that I got my one and only hug from the man I had admired for years.  Just before I wrote this, I sat down to watch him in my wedding video.  His advice to me, "be happy".  Simple words with a great deal of weight.  When he had heart problems a few years back, I knew that someday, he would be gone, but like all of us, I refused to believe there would be an end. 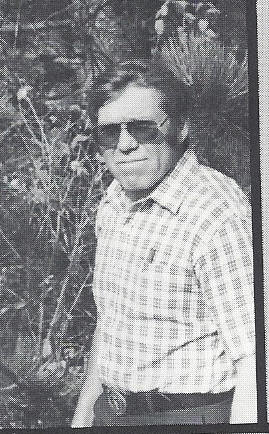 Coach Koch, I'm sure you were never fully aware how deeply you touched my life, and the lives of all the kids you came in touch with.  I know that I'm a better person because you gave me the belief that I could...